Frederic D'haene is a Belgian avant-garde composer and creator of his own composition technique called 'paradoxophony' or 'paradoxical coexistence'.

He was born on 24 August 1961 in Kortrijk, Belgium and was introduced to music at an early age by his father who played classical and jazz piano. Frederic also started to play the piano and enrolled in the local academy. His first interest in composition arose when he was 14 years old and he was inspired to write a three-minute piece every day. In 1986, he graduated with a degree in musicology from the University of Ghent with a dissertation on Webern's Variations for Orchestra and joined the Royal Conservatoire in Liège, where he followed the teachings and guidance of the renowned composers Frederic Rzewski, Walter Zimmerman, Henri Pousseur and Vinko Globokar. In 1986 Frederic also discovered Gagaku music (traditional court music from Japan) through the masters Tadatoshi Miyagawa and Kanehiko Togi. This new musical universe inspired him to write Music with silent aitake's, a piece that achieved a unique coexistence between western and Japanese music.

In 1988 he attended the International Summer Course for New Music in Darmstadt, which proved to be a decisive moment in his musical career with the discovery of his music by Marianne Schroeder and André Hebbelinck. From 1990 to 1996, Frederic D'haene worked at Royal Conservatoire in Liège as an assistant to Frederic Rzewski. Between 1999 and 2000, he taught aesthetics at the Hogeschool voor Wetenschap en Kunst in Ghent, before dedicating himself entirely to his own creations and moving to the Netherlands where he lived as an independent composer.

He returned to Belgium in 2009 and founded De Muziekautarchie, a non-profit-making organisation that aims to improve composers' socio-economic status. More recently Fluxus - static friction was performed by Het Collectief and conducted by Robin Engelen in Tilburg (NL) in December 2013 and Leuven (BE) in October 2015, Hearing from nowhere-part 3 was performed in Geneva (CH) by the ensemble Contrechamps and conducted by Michael Wendeberg in October 2014, and Music with silent aitake's was conducted by Kasper de Roo and performed in January 2015 by the Ensemble Modern and Raigakusha at the Frankfurter Positionen festival (DE).

His varied work comprises orchestral music, chamber music, pieces for solo instruments and vocal music and has been programmed, recorded and broadcast in Belgium and abroad by a large number of festivals and venues such as deSingel (BE), Ars Musica Festival (BE), Transitfestival (BE), Blackheath Halls (UK), Edmonton New Music Festival (CA), Toronto Music Gallery (CA) and Gesellschaft für akustische Lebenshilfe (DE).

After three years of silence due to debilitating multiple sclerosis, Frederic is currently busy writing Resist to exist, an opera about freedom and power, devised and shaped along a theological and humanist line on the one hand and a Palestinian line on the other. The texts chosen featured are by Mahmoud Darwish in English translation, Dietrich Bonhoeffer, Albert Camus and Sade.

Some fragments of text about the early compositions (up till 2000) written by Thierry Levaux
While one of the characteristics of the 1950s avant-garde was an attitude of "tabula rasa", Frédéric D'Haene believed from the outset that music could be generated from all types of material: he therefore rejects nothing from the past but puts it on an equal footing with any concept that appears of interest to him. He is not afraid of using more traditional formations, such as the string quartet or symphony orchestra, but he has also composed work combining a gagaku orchestra with a chamber orchestra in Music with silent aitake's for example. In the extensive field of his continuous exploration, his key word is pluralism: he does not want to choose one world or one language, but favours an aesthetic of coexistence. Like his vision of society, he does not want there to be barriers of any kind. This principle of coexistence leads him to combine elements which have different origins that might be thought incompatible, allowing them to retain all their specific features and expressive power. He loves paradox which is essential for him at all stages of the creative process. More specifically, he combines modality, atonality and spectral music, random and organised form, East and West, stasis and dynamism, sound mass and silence, constant and changing tempo and simplicity and complexity. Continually putting opposing concepts into perspective gives them a new dimension, broadening them without completely altering their nature.

An opera for 5 singers (S-A-T-B-B) of whom 2 (A-T) should also be rapping, chamber choir (A-T-B), the chamber music quintet 'Het Collectief' and orchestra.

Resist to exist is based on "l'homme révolté" [The Rebel] of Albert Camus and more precisely from his thought that "from Sade's lurid castle to the concentration camp, the greatest liberty of man, who drove God from His heaven, consisted only in building the prison of his crimes". Next to this thought, Camus stated in "l'artiste et son temps" that he was in the service of those who suffered history, not those who made it.

From there arose the title "Resist to exist", which I also saw in the old market square of Nablus ( occupied West Bank) on a liberation mural painting, expressing the suffering of people, contemporary victims of the vehement European anti-Semitic history.

From there on, different layers of texts where formed by Mahmoud Darwish (an English translation of the poems "Under Siege", "The Prison Cell", "Slain and Unknown" and excerpts from "Song of the Red Indian"), Dietrich Bonhoeffer (excerpts from "Widerstand und Ergebung, Briefe und Aufzeichnungen aus der Haft" [Letters and Papers from Prison] and Nachfolge [The Cost of Discipleship]), Albert Camus (excerpts from "L'homme révolté" [The Rebel]), Sade (excerpts from "La philosophie dans le boudoir" [Philosophy in the Bedroom] and "Les 120 journées de Sodome" [The 120 Days of Sodom]) and from the Palestinian solidarity campaign, Defense for Children International Palestine, Anna Baltzer ("Witness in Palestine") .

Referring back to the original thought of Camus:
-From 'who drove God from his heaven I arrived at (experts from) Dietrich Bonhoeffer "Widerstand und Ergebung, Briefe und Aufzeichnungen aus der Haft" who ends in "religionsloses Christentum".
-From Sade's lurid castle La philosophie dans le boudoir and "Les 120 journées de Sodome"


[To a killer] If you had contemplated the victim's face and thought it through, you would have remembered your mother in the Gas chamber, and freed yourself from the rifle's prejudice and you would have changed your mind: this is not the way to find one's identity again.

This is a verse from 'under siege' from Mahmoud Darwish, big parts of this poem are living in this opera, also the prologue and the epilogue.

Between this prologue, preceded by an ouverture, and epilogue, there are 7 lines, a kind of analogy with 'fault lines', where different tectonic plates meet, this is because during all these lines texts occur simultaneously, BUT in different tone systems.

It should be noted that the words of Darwish and Bonhoeffer are sung: Darwish's poems by a soprano mainly coloratura, while Bonhoeffer's excerpts are sung by an operatic bass voice .The philosophical and informative texts will all be "rapped", accompanied by a cajon. 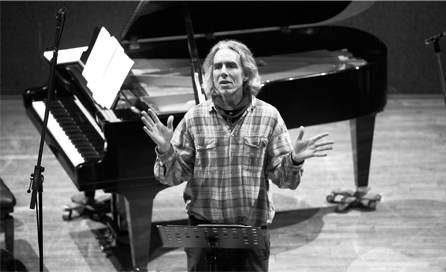 How do you compose when a mother tongue has disappeared? How do you communicate without a mother tongue? By "mother tongue", I mean the tonal system and everything that comes from it: work based on scales, with motifs, themes, accompaniment formulae and a shared grammar constituting a frame of reference for generations of composers and which was shattered in the twentieth century. Here is a situation full of questions, extreme tension and uncertainty, where the very function of composition changes. It is no longer the production of music, but tends towards invention, creation, construction, making an original musical universe based on a challenge and a battle. To paraphrase Paul Valéry, it could be said that each artist is sizing himself up against this challenge, the challenge considered an existential truth in the face of this absurd situation of uncertainty.

This "challenge-battle" is not just at the root of writing, but also at the root of its execution. Like the composer, musicians find themselves confronted with situations of extreme musical tension, both physical and mental.

The making of my musical universe is not done gratuitously, but is based on a trend in musical material that I have observed, consisting of increasing autonomy and liberation in harmony.

In what is now autonomous or "pure" harmony, chords no longer have the same function. They become static elements of colour, duration and space, and dynamic elements of rhythmical articulation, indeed even percussive material.

I have found a visualisation of this "pure harmony" in the form of simultaneous static and dynamic layers in a painting by Paul Klee entitled Florentinisches Villen Viertel ("Florentine Villa District") which has become a generic model for all my compositions.

In autonomous harmony, the purest chord in the first degree is silence, while in the second degree it is the beat. Between two silences, between two beats, the minimal, most static connection that can be established is the drone, that is to say a sustained sound. This drone can be coloured modally, expressed spectrally or extended and broadened axially by atonal textures. This coexistence of configurations of logically exclusive pitches forms the basis of my technique of "paradoxical coexistence".

This technique also extends to the field of rhythm where a fixed and constant tempo and a changing tempo coexist simultaneously and rhythmical cells of various types - both simple and complex - are superimposed. This polyrhythm converges with the "polyharmony" in the sense that one articulates what the other colours (and vice versa).

More broadly, this technique of paradoxical coexistence is manifested as a coexistence of sound mass and silence, form, energy flow and void, control and aleatory.

Thus the universe evoked at the start as a universe of uncertainty is at the same time affirmed as a universe of relativity in which there is no duality between logically incompatible elements. As a matter of fact, it is close to the "Zen" world which has had a profound impact on me and offers a great parallel with several modes of thinking in the modern western world, such as those found for example in the work of Jackson Pollock or John Cage.

Now available on CD
"Music with silent aitake's" with Reigakusha and Ensemble Modern. Created in 2015 and now on CD (Ravello Records).

Music with Silent Aitake's for Gagaku and chamber orchestra

"Your music is not just western contemporary music... it has a feeling of the world, not just the pulse of the world with its frenzied rhythmical continuum, but the scents of the world... not just east/west... but with 'roots'" - Jean Pierre Peuvion, clarinet player (2015).
"Magisterial music" - about 'Music with silent aitake's', Claude Ledoux, composer (2016).
"My bravo to you because you try to open doors which other composers don't have courage to ope"n - Kee Yong Chong, composer (2009)
"Self-willed, uncompromising and dramatic - open music" - about 'Hearing from nowhere – part 3': "phenomenal music", Mark Delaere, professor Musicology (2011/2015)
"I have great respect for his talent and intelligence, both as composer and as teacher" - Frederic Rzewski, composer, pianist (2006)
"An unmistakable successful fusion between complexity and expressive quality" - Rudy Tambuyser, music journalist (2005)
"Soft anarchism,music of soft contradiction" - Yves Knockaert, professor of philosophy of music and contemporary music (1993)
"An impressive achievement" - Andrew Timar about "Music with silent aitake's" on The whole Note (April 2019)
"Iedere avontuurlijk ingestelde muziekliefhebber moet hier echt een keer voor gaan zitten en deze prachtige klanken op zich in laten werken" - Ben Taffijn over "Music with silent aitake's" op Nieuwe Noten (2019)
"D'Haene has constructed with estimable precision a work where both ensembles accompany and counterpoint each other, achieving a remarkably satisfying synthesis that transcends" - Guy Rickards in The Gramophone about "Music with silent aitake's" (July 2019)